Crime genre television programmes and films recommended by our crime team to pass the time during the long lockdown evenings: 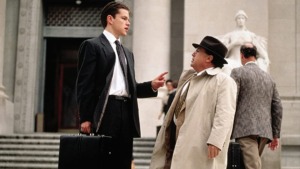 Summary: An underdog lawyer takes on a fraudulent insurance company.

Alex comments: “I saw this the other day for the first time. Although I’m sure members may feel that the book was better, this is a good watch for a well-observed example of the see-sawing nature of a trial, and how slam-dunk points can quickly backfire.”

The Departed, recommended by Fiona Clancy 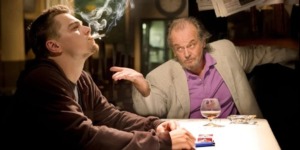 Summary: An undercover cop and a mole in the police attempt to identify each other while infiltrating an Irish gang in South Boston.

Favourite quote: Frank Costello – “When you decide to be something, you can be it. That’s what they don’t tell you in the church. When I was your age they would say we can become cops, or criminals. Today, what I’m saying to you is this: when you’re facing a loaded gun, what’s the difference?” 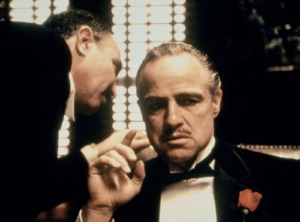 Summary: Don Vito Corleone, head of a mafia family, decides to handover his empire to his youngest son Michael. However, his decision unintentionally puts the lives of his loved ones in grave danger.

Michael’s favourite quote: ‘My father made him an offer he couldn’t refuse, Luca Brasi held a gun to his head and my father told him either his brains or his signature would be on the contract’

Sonny: Hey, whataya gonna do, nice college boy, eh? Didn’t want to get mixed up in the Family business, huh? Now you wanna gun down a police captain. Why? Because he slapped ya in the face a little bit? Hah? What do you think this is the Army, where you shoot ’em a mile away? You’ve gotta get up close like this and bada-bing. you blow their brains all over your nice Ivy League suit. C’mere…

Michael: Where does it say that you can’t kill a cop?

The Wire, recommended by Alexandra Sutton 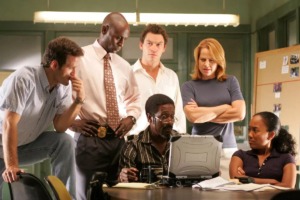 Summary: In the city of Baltimore, Detective James McNulty and his team investigate crimes and try their best to solve the bridge that exists between the drug kingpins and the law enforcement agencies.

Alex comments: The Wire is on the face of it a cop show, but in reality it’s about power structures and the individuals that comprise them – police, dealers, users, politicians, workers… It’s incredibly detailed, the characters are iconic and it has the best depiction of an OCG you’ll see – as close to perfection as TV can get!

Favourite quote: “You come at the King, you best not miss.” 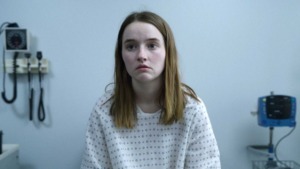 Summary: Based on the true story of Marie, a teenager who was charged with lying about having been raped, and the two female detectives who followed the path to the truth.

Harriet comments: I recently watched this and found it so addictive and moving. It’s a great lesson in how the pressure and distress of a mishandled rape investigation on the victim can lead to the retraction of a truthful allegation. Also – the main actress Kaitlyn Denner is on a roll at the moment (watch Book Smart if you need a good cheering up).

Favourite quote: “Even with people that you can trust, if the truth is inconvenient, they don’t believe it.”

Passing the time can be difficult at the moment and a lot of households are turning to quizzes to help out. Sean Smith has composed a round for the real crime bods out there. The challenge? Name the detectives – we’re looking for firstnames and surnames. Tweet us your score @ExchangeC