David Knifton QC from Exchange Chambers has secured a substantial award on behalf of a young woman following a tragic accident.

The young woman suffered life-changing injuries when she fell approximately 3m from a parapet wall onto the ramp leading to the underground loading bay at a shopping centre in Derby.  The woman had been out celebrating her 29th birthday with a friend in November 2017, and was walking towards the Debenhams store, where they were due to be collected and driven home by another friend.  Although she had no recollection of the accident, and no-one witnessed the fall, it appears that she sat on a metal Armco crash barrier on the parapet wall because her footwear was hurting her feet, but accidentally fell backwards onto the ramp below. As a result, she suffered a fracture dislocation to her cervical spine, leaving her paralysed from the waist downwards. 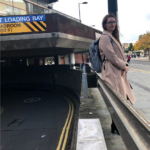 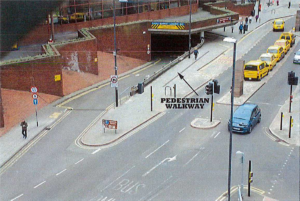 The images show the ramp to the loading bay, together with the crash barrier from which the Claimant fell. Originally, the carriageway ran close to the barrier.

A claim for damages was issued in the High Court in London in November 2020 against Derby City Council and the occupiers of the shopping centre. It was alleged that the Council was liable for negligently creating a source of danger on the highway by failing to replace the vehicle crash barrier with suitable pedestrian railings when it carried out extensive pedestrianisation works around the shopping centre in 1988, and again between around 2006 and 2011. Although vehicles had been diverted away from the parapet wall and wide pedestrian footpaths had been constructed adjacent to it, the vehicle crash barrier had been left in place.  Had pedestrian railings been installed in its place, they ought to have been at least 1m high, to comply with relevant British Standards.  In contrast, the crash barrier was only around 800mm high.  In the alternative, it was alleged that the occupiers of the shopping centre were liable for failing to install a suitable guard rail, given the height of the drop onto the ramp below.

Liability was firmly denied by both Defendants.  They maintained that the highway had been in the same condition for many years prior to the Claimant’s accident, with millions of pedestrians walking along the footpath each day, during which no other accidents had occurred.  Each contended that the Claimant was the author of her own misfortune.  They relied in particular upon the recording of the 999 call made at the time, in which it was said that the Claimant had “jumped to get on the barrier” whilst drunk, and had fallen backwards.  The Claimant’s friend was heard on the same recording saying “she was just being a twat basically”.  The ambulance notes also recorded that the Claimant had been drinking heavily.

Despite those denials, the Defendants agreed to meet to discuss the case.  Prior to that meeting, David Knifton QC prepared a detailed Note, setting out the legal basis of the claim and highlighting the fact that the pedestrianisation works were likely to have significantly increased the volume of pedestrians using the area (including young children), that pedestrian guard rails could have been installed at modest cost, and that the accident would have been prevented as a result.  Despite the content of the 999 call, the ambulance notes recorded that the Claimant went to sit on the barrier and fell backwards.  Although a substantial finding of contributory negligence was inevitable, he argued that the claim had merit.

Although the Defendants had initially made clear their intention to contest the case to trial, they were persuaded that the Claimant had a real prospect of success, and agreed to make a 7-figure settlement payment.

Commenting on the outcome, David Knifton QC said: “This case is a tragic reminder of how a momentary error can lead to lifelong consequences.  I am delighted that we were able to secure compensation which will make a real difference to this young woman’s future.”